In Shadow: A Modern Odyssey is gorgeously illustrated film by Lubomir Arsov. It embarks on a journey the fragmented unconscious shadow of the modern world. It explores into the human psyche, bringing society’s dark underbelly to the surface, exposes all of the horrible and scary things going on in our society that we’re all either too blind or too afraid to talk about. Also on positive side, it shows the breaking free from the enslavement of dark and not-so-mysterious shadow workers. The film is a call for awakening.

“This film was created with earnest effort, diligence, and sacrifice. It is an urgent call to growth. If you are moved by the content, please SHARE.”— Lubomir Arsov

A number of analysis of the film can be found online. However they do not cover in details the occult aspect of the film. I am analysing the film including the occultism from beginning to end into 2 parts(this post is part 1). I rely on these different made analysis sources(1source, 2source, 3source,4 source) to help me develop further my analysis. I advise people to watch the film if they have never watched it before reading the analysis further.

At first you see one dark sphere splits into three identical light spheres in dark space arranged in equal-spaced triangle. I think it is referring to:

An eye appears, the pupil dilates, and the screen turns completely white.

An eye appears, the pupil dilates, and the screen turns completely white. It references the eye-openings, awakening to god-like awareness.

A white sphere reveals a black cube-shaped Earth . It references to the black cube occultism. Civilisation/society developed and it imposed and “shape the Earth”. Here it symbolises the building or the shaping of an artificial reality on Earth.

A giant black cloud leaks from a floating megacity.

A megacity appears to be the source of some “dark energy“. At first glance the giant black cloud above the city seems like a reference to pollution, however, after the frame zooms in a bit, separate “pollution-esqe” looking clouds appear in the middle of the skyline. Also, the black cloud does not behave like a normal cloud and sort-of resembles smoke or black goo. In fact, it looks like a corner of a black cube. It may signify here the power-control, domination or reality-projection of the black cube over society.

The city fades to black as the title “IN Shadows” comes into view.

The title of the video seems to reference:

A towering building in the centre of the megacity is revealed to be the source of the black cloud.

The black cloud appears to originate from a huge building in the centre of the city. It’s worth noting that this “source” building is perfectly vertical while the other buildings lean in all directions, alluding to their self-proclaiming superiority of the black cube occultism over society.

The floating symbolism is comparable to the Black Cube Project in Melbourne Australia where an optical illusion makes the top half of a cube structure appear to float.

It appears that the shadow workers can be found in the top floors of this tower and that they are on a different “level” exclusive to their group. They are performing occult ritual to summon a red-glowing vertex cube entity. You will see the glowing-red “cloud” around objects, persons or background. it symbolise the access or the control-power over the collective unconsciousness.

The cube travels through a large crowd and is placed around a man’s head.

The Cube flies past everyone else in the crowd and is placed around a man’s head with a hole filled with black goo-ish smoke. This shot represents the main idea of the film: that humanity is under deep mind control. It feels like this implies that the mind enslavement program. Notice afterwards an array of red halo light flashing the screen. It radiates and spreads. It’s an inversion of the religious halo meaning as holy, sacred figures or images of rulers or heroes; instead here it means unholiness, non-spirituality or an image of an enslaved figure by dark rulers. 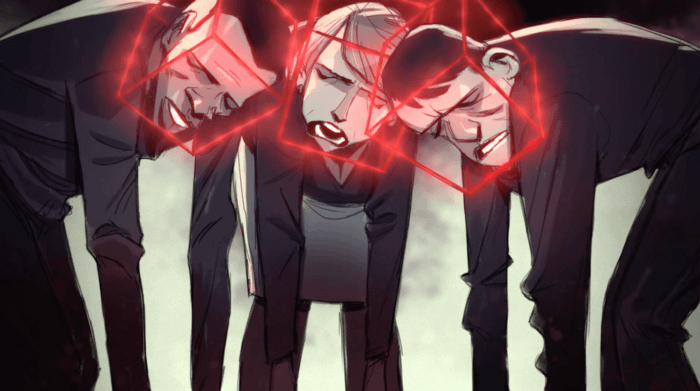 Three people appear with the cube around their head.

This portrayal of how humans feel as slaves to the system governed by the black cube power not only highlights the despair of someone under mind control, but how it affects their entire being. More times than not, when we slouch, hunch over, or have poor posture it’s a reflection of how we feel internally: evidence of a mentally and physically drained society. 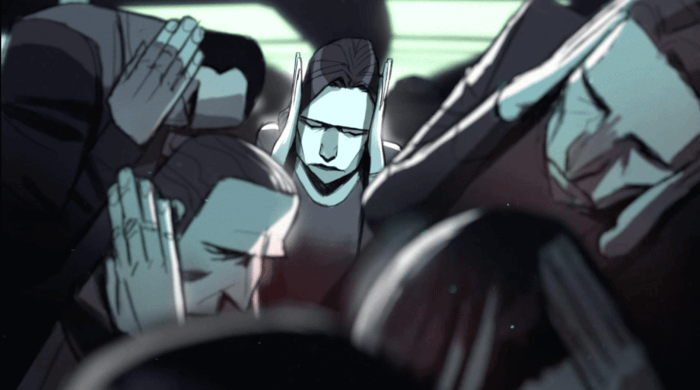 see Nothing, hear Nothing, say Nothing

A crowd of people whom they willing close their eyes, ears and mouth. The individual or this group embodies the three wise monkeys referring to those who deal with impropriety by turning a blind eye. Also notice their hands on their head on each person forming a cube-like shape, symbolising the dominating mind-control onto the group or individual by the power of the black cube. Instead of listening to our inner voice, we pretend everything is ok. This is the exact reason most evil exists.

people hanging upside down and the clock spinning round.

A disturbing scene of people hanging upside down and the clock spinning round indicating hours and hours just passing, while the people (employees and trapped masses) are just hanging there, going NOWHERE. Time consumes all things. The black cube relating to Saturn god, being an anthropomorphic representation of Time, which is filled, or satiated, by all things or all generation.

The mask we all put on.

We see from here on a lot of masks on peoples faces. This is to show how we’ve become blinded and brainwashed to everything that’s going on, and we put on a mask to hide our TRUE feelings of unhappiness and discontent. Here the mask represent the psychic Jungian persona.

The persona according to Jung, is a social face the individual presented to the world, designed on the one hand to make a definite impression upon others, and on the other to conceal the true nature of the individual”. The mask give a sense of social connection to the world. Here we see people taking full identity of “happy face”; resulting to “the shallow, brittle, conformist kind of personality which is ‘all persona’, with its excessive concern for ‘what people think‘”, an unreflecting state of mind ‘in which people are utterly unconscious of any distinction between themselves and the world in which they live.

We see a naked baby being born, then 7 shining chakras balls mid-aligned to his body. Chakras refer to regions of the body that store, transmit, and receive life energy. Together, the state of the seven chakras signifies our wholeness; as they communicate with one another, they bridge the gaps between mind, body, and spirit. Here it means a baby is born pure but later we see he underwent spiritual corruption and mind-control by the world as soon as he gets out of womb. We see old men in black robe with black mortar-board guiding and leading the education of children. They represent the educational saturnian agents of the system that mind-control children to docility and conformity.

The saturnian elite conspires to control world affairs by masterminding events and planting agents in the government, media, movies, TV shows. They are depicted as dark shadows agents, lurking everywhere, pulling strings, speaking through TV shows/News presenter or politicians, leashing celebrities and lobbying the entertainment industries. They push their dark agenda to influence or condition the general population.

The digital technologies is presented by the cult, as an alternative to spirituality in the form of a perfect distraction. All reality becomes virtual, as persona replaces personality. Romance replaced by an algorithm. Conversation becomes nonverbal and 1-dimensional. Notice the red hue around smartphone. The red hue symbolises the tool accessing the mass consciousness of the world. Also by occult meaning, smartphone in the form of small black cube represent the saturnian tools that either imprison the user into a virtual reality or give the users the power to influence reality around him. 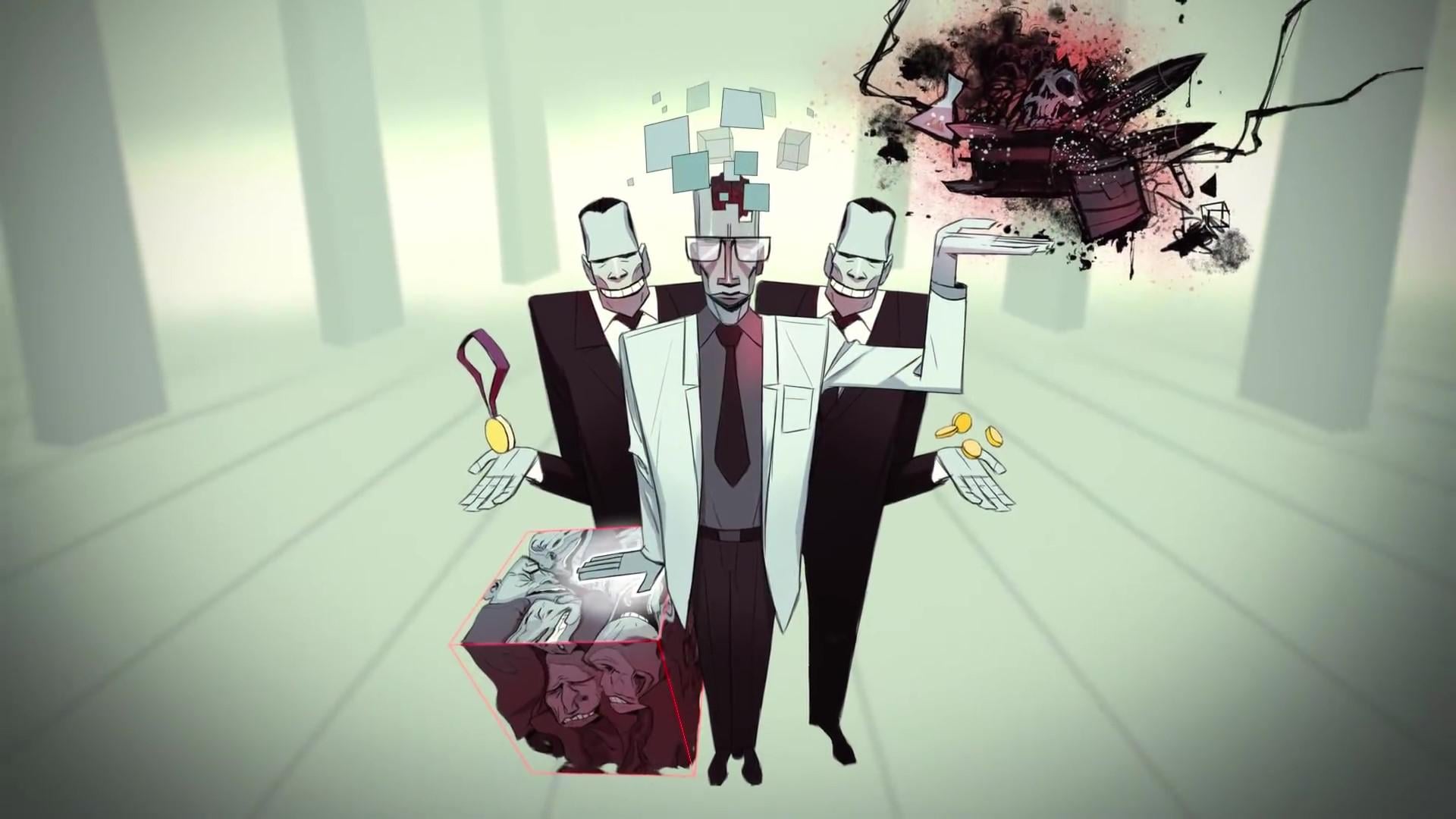 Dark side of science

In this image, we see a man wearing white lab blouse at the centre doing the Baphomet pose. According to Lévi, he considered Baphomet to be a depiction of the absolute in symbolic form. Or Baphomet is a symbol that represent occultism. Here the centre man represent the dark side. One arm pointing down to a cube that imprisons people in the red cube, the other arm pointing up to a red-hued, black cloud mixed with controversial materials(toxic chemical, human skull, wastes, bomb rocket). Here the man represent the dark side of science that use scientific knowledge to keep people trapped and to harm others. Plus the “dark scientist” is rewarded by two agents, showing the saturnian cult influence over science. 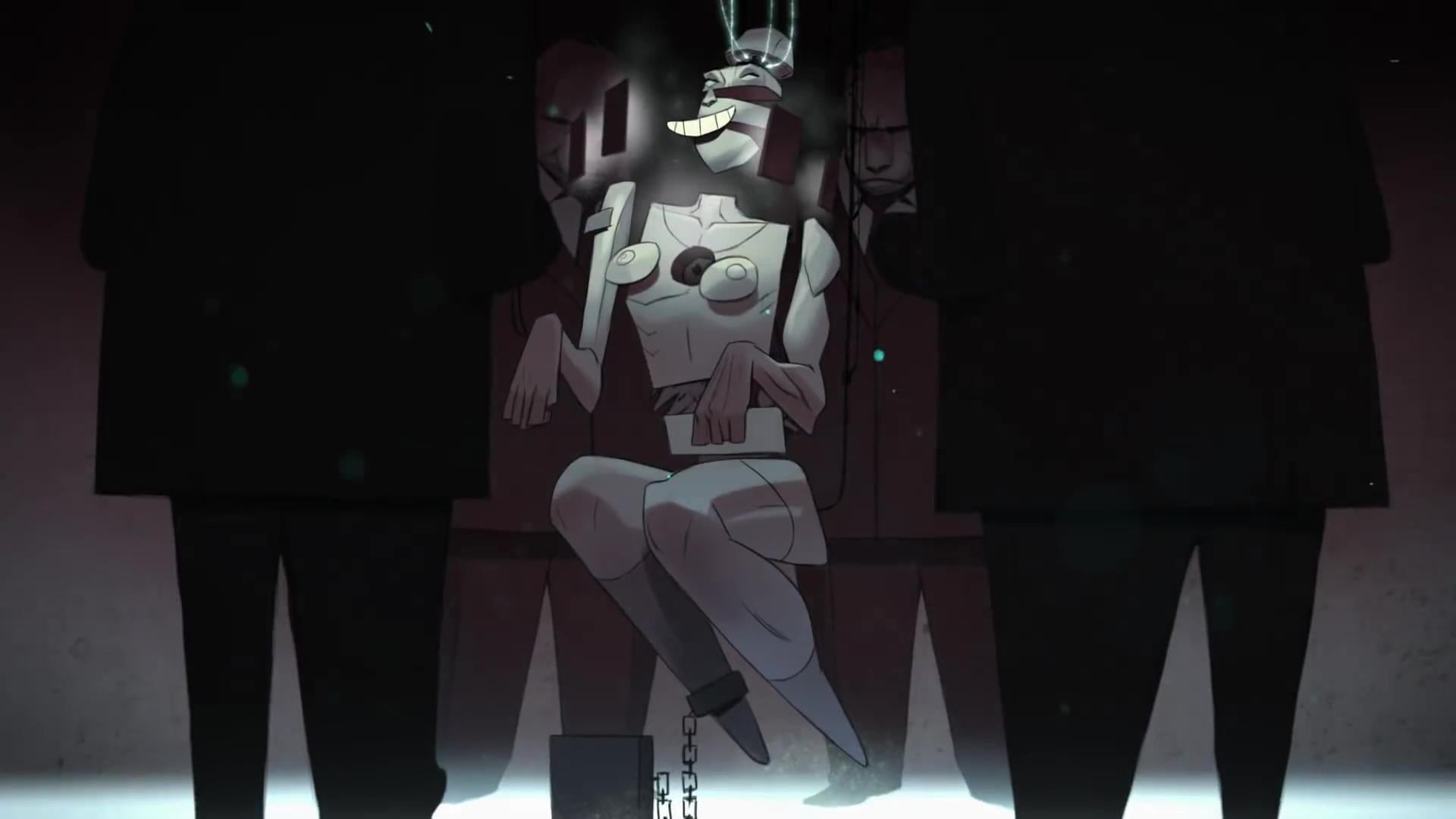 We see a female robot on a sitting pose, “brain-wired”, smiling to hovered smartphones, surrounded by men in back costume looking at her. It makes reference to the movie “Metropolis”(1927).

It is an heavy-occulted movie that deal with the dichotomy between the upper-class and the lower-class workers . In brief, the elite used technology and their occult beliefs to create a robot that took appearance of a woman, called Maria, whom men loved. The false Maria danced and comes to men as the “whore of Babylon”, putting a trance upon the men of the city. Her dances were seductive in nature and captured the attention of all those who dare fix their gaze upon her. She tricked the workers into destroying the machine that they actually used to keep themselves alive. More info to the occultism of the film in this source.

Here the image represents the objectification of women and the conditioning of them to turn them as tools in the virtual world to put a trance the men online to keep them docile and unspiritual. Notice the robot is chained t o a black cube, signifying that the robot is imprisoned to the saturnian simulation, or under the influence of dark saturnian cult, but at the same time uses the power of saturnian tools(smartphone) to trance men. She is under the control of the 4 men that controls her.

A familiar smile blinds millions to the unseen horrors of a Presidential career. A dark cloud comes out of him representing dark polluting influence to the surrounding.

Clues regarding rumours of pitch-black perversions, both overt and covert, are shown framed on a desk made of death:

I believe these are subtle references to the pizza-gate conspiracy.

The flashes reveal his internal breakdown.

“Occult analysis of the short film “In Shadow: A Modern Odyssey”.[Part 1]” üzerine 5 yorum