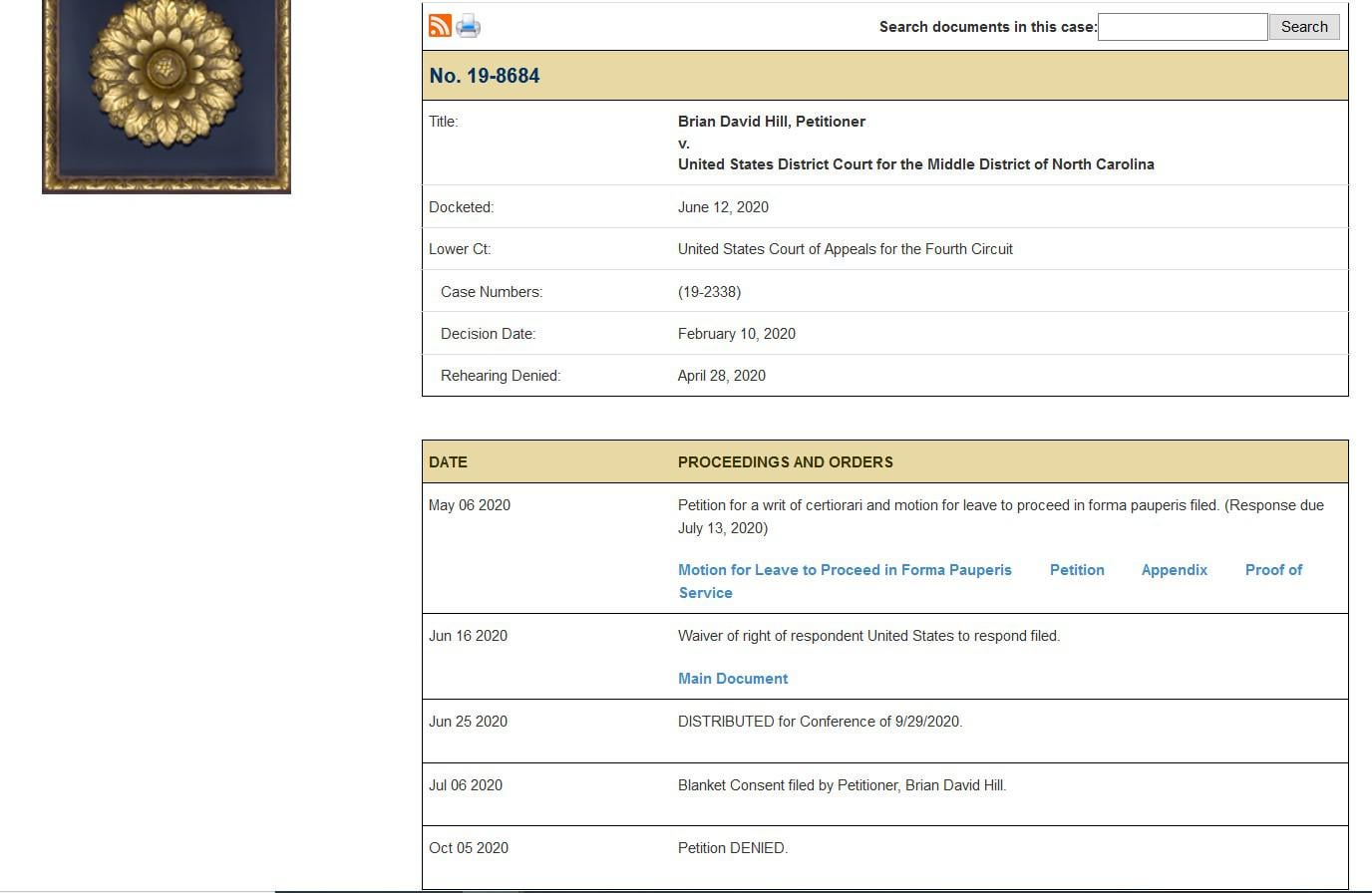 NOTE: The letter from Brian D. Hill to President Trump is below the Supreme Court information, just scroll down to find it.

Bad News! After all of the hard work that Brian D. Hill of USWGO alternative news had done proving fraud upon the court and his actual innocence, the Supreme Court had yesterday denied his petition for writ of certiorari. Thus allowing a CORRUPT federal judge to ignore motions and refuse to take action upon them which creates a permanent barrier against Brian’s constitutional right to appeal an unfavorable decision. Now courts have the right to ignore motions completely which contradicts past case law precedent from the Virginia Supreme Court and the U.S. Supreme Court. There was no opinion or comment for the denial of his petition. What is going on here? Have our courts been hijacked, infiltrated, threatened, blackmailed, family threatened, bribed????????? Well remember that John Roberts the Chief Justice may very well be involved with serial pedophile Jeffrey Epstein even though Praying Medic disagrees. 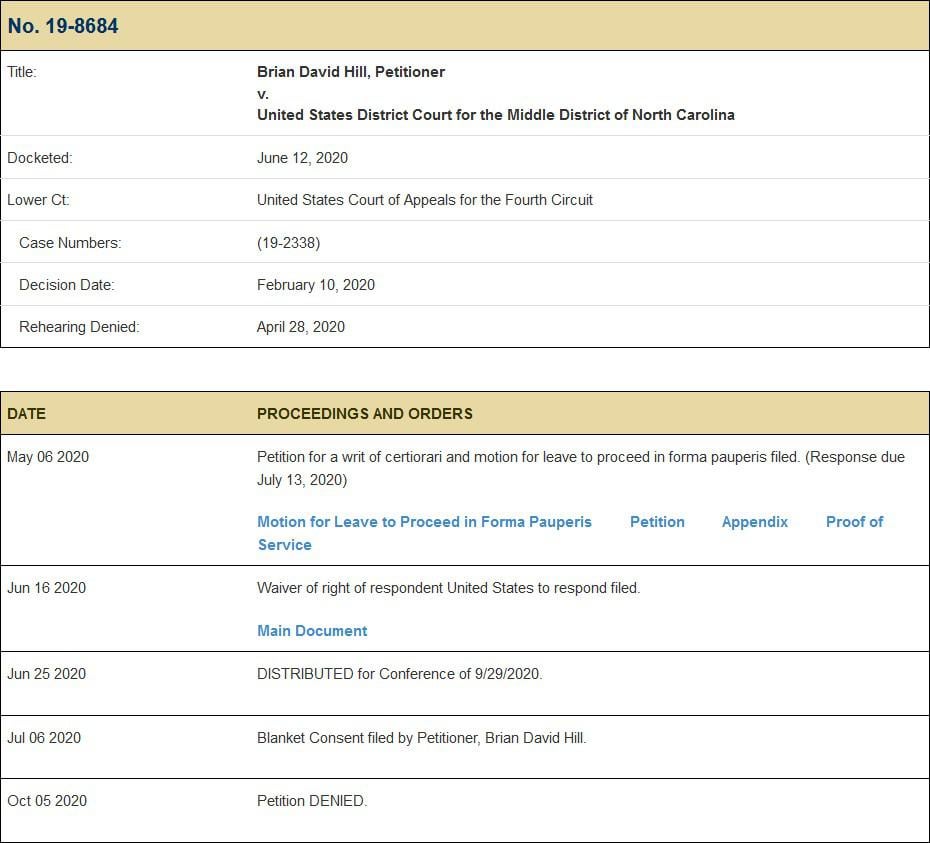 The petition for denial had shown up in a 67-page order list. There was a large number of cases under the category of “CERTIORARI DENIED” and Brian’s case was in those sea of denials of petitions asking the Supreme Court to intervene in their cases. 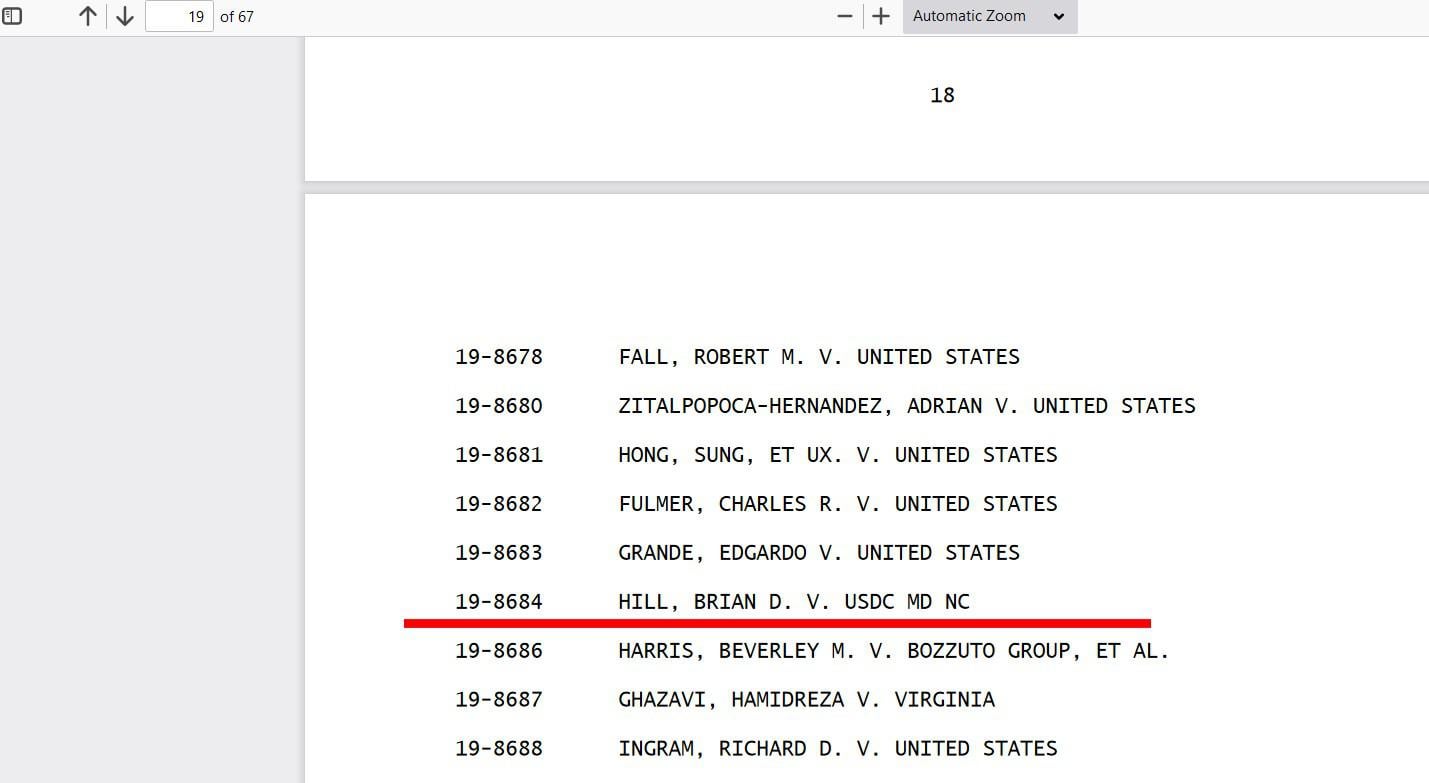 It almost appears as if the Justices may not have even taken the time to read Brian’s petition itself, this is a travesty of justice. Brian had mailed letters to both Justice Brett Kavanaugh and even Justice Clarence Thomas explaining that taking no action leads the court to “ROT” with shaky foundation as well as termite damage from the frauds and will cause the credibility of the U.S. District Court of the entire Middle District of North Carolina to collapse. That court is no longer legitimate, they are not acting as as Article III sanctioned court but is acting like a gestapo agency making sure to keep throwing Brian D. Hill in federal prison over and over again, ignoring evidence, using his Autism behaviors as a criminal behavior against him, and ignoring well-established case law in the federal Supreme Court and circuits. Brian compared the federal-court under the leadership of Chief RAT THUG TYRANT Judge Thomas David Schroeder, to a home rotting from the very foundation which will collapse from the termite damage and the damage to the court’s credibility by Judge Schroeder allowing frauds to openly be perpetuated upon his entire court district. This is a disgrace to the state of North Carolina, this is disgrace to the “Fourth Circuit” federal court of appeals in Richmond, Virginia.

The court of appeals has protected the frauds, the U.S. District Court protected all of the frauds against criminal defendant Brian David Hill. Under the local civil rules of August 1, 2020 and older civil rules of the Middle District of North Carolina, Brian David Hill was entitled to not have to turn himself into federal prison last year, Brian did not violate a single condition of supervised federal probation. The record fraudulently says that Brian had been revoked of his supervised release and the record also fraudulently says that Brian had violated his federal probation conditions in 2015. Two fraudulent probation violations permanently sit on his criminal record for the general public to see. Brian had every constitutional and legal right to file a writ of mandamus,

On the entire docket sheet, there was NO responses by Anand Prakash Ramaswamy, Esq., and that should have been considered uncontested according to the U.S. District Court’s own local rule that is treated the exact same as a law passed by Congress. So the corrupt Chief Judge Thomas David Schroeder KNEW that Ramaswamy did not file any pleading contesting those four motions, and it should have ordinarily been granted by the court, but then Brian would not have been ordered last year to self report to the “Federal Medical Center” in Kentucky. He unlawfully and unconstitutionally ordered Brian’s imprisonment and stained his criminal record even further with two probation violations with his own dirty corrupt hands. He gave a terrible reason for finding Brian in violation of his conditions in 2015 and accepted the testimony of a perjurer and called that liar a “credible” witness. This same judge ignored Brian’s probation officer Jason McMurray in 2019 because Mr. McMurray was not bad mouthing Brian and did not lie against Brian in federal court, unlike the dirty deep state puppet Kristy L. Burton of Danville, Virginia.

Those two motions asking for sanctions requested the removal of his probation violations based upon the Court’s inherit powers to vacate any judgments or orders that the Movant of a motion proves to have been grounded upon fraud and that the evidence was fraudulent and never should have been treated as a fact in a civil or criminal case. Brian’s motions were so effective that Judge Schroeder knew that he would have no choice but to grant Brian’s uncontested motions thus Brian would lose the penalties associated with the two fraudulently filed and conviction of violating conditions of supervised release. If the judge denied any of the uncontested motions, Brian could appeal them and bring up the local rule and it would have to be granted to give the appearance of justice. Instead Judge Schroeder ignored the motions and had decided to never act upon them. Those motions just sit in the docket sheet and are never given an order or judgment. That itself violates Brian’s due process rights under the fifth amendment of the United States Constitution.

Brian’s letter to President Trump asking for EMERGENCY relief against being held hostage by a corrupt kangaroo tyrant federal judge that acts like a thug who is above the law: 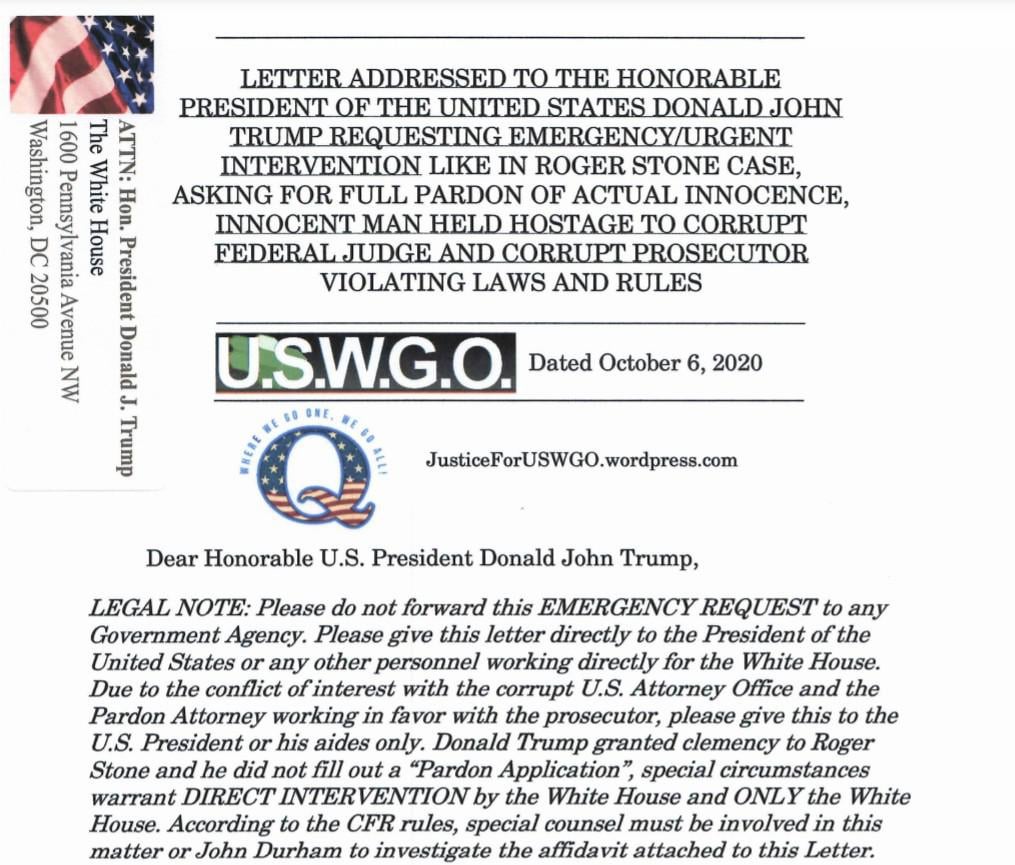 Brian D. Hill plans on filing a petition for rehearing in the Supreme Court and if that fails then a petition for writ of mandamus in that same Supreme Court according to the statements made in the 30-pages total of letter to President Trump. Brian says if that fails too then his only remedy is a “full pardon” as Brian explained to the President that he helped Roger Stone and so Brian should be allowed a pardon without being forced to fill out a pardon application for the U.S. Department of Justice, and stated that they are protecting the corrupt fraud perpetuating U.S. Attorney and are acting in conflict of interest.

Brian also explained in his letter to President Trump that the Supreme Court had made a ruling that the President has a right to declare somebody innocent using the power of a full pardon that is unconditional.

Such being the case, the inquiry arises as to the effect and operation of a pardon, and on this point all the authorities concur. A pardon reaches both the punishment prescribed for the offence and the guilt of the offender, and when the pardon is full, it releases the punishment and blots out of existence the guilt, so that, in the eye of the law, the offender is as innocent as if he had never committed the offence. If granted before conviction, it prevents any of the penalties and disabilities consequent upon conviction from attaching; if granted after conviction, it removes the penalties and disabilities and restores him to all his civil rights; it makes
Page 71 U. S. 381
him, as it were, a new man, and gives him a new credit and capacity.
Ex parte Garland, 71 U.S. 333 (1866)

Brian has explained that if the Judge weren’t such a corrupt thug and acted in accordance with the law, Brian wouldn’t be convicted for possession of child pornography as the evidence in favor of his innocence is overwhelming, and also referring to the facts that the U.S. attorney assistant Anand Prakash Ramaswamy did not contest his fraud claims and therefore Brian is entitled to full relief of his probation violations he was found guilty of and that he is entitled to default judgment in his 2255 case in favor of Brian David Hill being actually innocent of his charge possession of child pornography due to the proven uncontested frauds upon the court that had been perpetuated by Ramaswamy since the whole case had begun in November, 2013, during the Obama Administration. All of this was explained in his 26 page affidavit that appears to be what he is mailing to President Trump. Brian said to his family and friend that he will make sure this letter gets to Trump, even if he has to attend any Trump rallies in Virginia to try to ask a Secret Service member to obtain his paperwork and give it to the President. Brian explained that he will fight tooth and nail for a pardon of his innocence to the 2013 charge he is innocent of, that Brian should never sleep one more night while on the sex offender registry. Brian says he will fight tooth and nail as he is a virgin, will never sexually abuse anybody, the entire court system is corrupt in North Carolina and needs to be stopped. Equal justice under the law is what he said.

Last thing, for those who read this article and feel outraged that all eight justices of the U.S. Supreme Court ignored Brian’s petition and his letters to the justices, that they are letting a corrupt dictator judge break the laws and ignore the laws and ignore the evidence, we are providing petition links to three different petition websites. We are asking every single person who visits this blog to sign the petition supporting Brian’s letter asking President Trump for a full pardon to teach that corrupt federal RAT judge Thomas David Schroeder a lesson in being a real christian, because the bible says though shall not bear false witness. False witness was bared from the grand jury indictment and all the way to his second probation violation. It is now time to impeach and ARREST judge Thomas David Schroeder.

Here are the Petitions for the White House staff and the President himself:
[We will email these petition links to the White House personnel because VBrian should not be convicted anymore, he has proven his innocence but the corrupt federal judge is HOLDING HIM HOSTAGE.]

Fully Pardon Brian David Hill of USWGO alternative news, HE IS ACTUALLY INNOCENT of his charge | We the People: Your Voice in Our Government