According to some researchers, our solar system may have looked much different in the ancient past. Author and scholar Immanuel Velikovsky claimed that the planets used to move in very different orbits and a close encounter with Saturn once caused a global cataclysm. Velikovsky said this event was the inspiration behind the many myths and legends about gods going to war in the heavens. However, the meanings of these stories became obscured due to something he called cultural amnesia. Now only symbolic fragments of our true history remain.

David Talbott wrote a book based on Velikovsky’s research. In The Saturn Myth, Talbott speculates Earth was once a moon of Saturn. During this time, Saturn would have hung ominously overhead and dominated the sky. He says this is the reason the ancients thought of Saturn as God. He claims this ancient version of Saturn had no rings and was much closer to the sun. He also says Saturn may have been a minor star. So the Earth, technically having two suns, would have had a much different climate. The Earth would’ve existed in a perpetual summer. We supposedly remember this period as the Golden Age. However, it apparently came to an end when some cosmic event caused the planets to rearrange. During this celestial upheaval, Saturn, Venus, and Mars aligned. This alignment supposedly resembled a bridge connecting to Saturn. 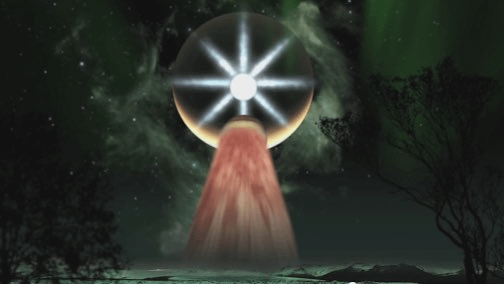 If Saturn was considered God, this alignment would have literally looked like a bridge to God’s dwelling place. Some say this was the real inspiration behind the Tower of Babel story. If you are not familiar with it, it is a biblical tale about a tower so tall it reached up to Heaven. Talbott claims, as the planets aligned, they went through many other configurations, at one point even forming a pupil in a triangle that looked like the all seeing eye. Perhaps this is the reason the symbol is associated with godlike knowledge and power.

Bull horns, the winged solar disc, and the boat of heaven are other important symbols. According to proponents of this theory, they actually represent Saturn’s crescent. Some say Satan represents Saturn, and perhaps this is where the idea of the devil having horns came from. In ancient mythology, Saturn sails the primordial waters in a celestial boat. Some say this is the true meaning of the Ark of the Covenant. Tracy Twyman noted that the celestial boat was sometimes called a chariot and The Bible calls the Ark of the Covenant the Chariot of God.

Tracy Twyman was an independent investigator. She wrote at least six books, most of them dealing with occult knowledge. She was found hanged in her garage at age 40. However, many of her fans do not buy the story. At one point she hinted at the possibility of being gang stalked after her computer was hacked.

Saturn’s Ship also seems to be represented by the Boat of Ra, and the Eye of Ra seems to be an earlier version of the all seeing eye. Ra was an ancient Egyptian sun God. Remember to keep in mind Saturn may have been our original sun while connecting all of these dots. The Boat of Ra also looks oddly similar to the modern day depiction of a wormhole. This might sound like a stretch, but in the same way a wormhole might be used to travel between dimensions, Ra‘s boat was used to travel between worlds.

A wormhole compared to the Boat of Ra

In the movie Stargate, the military opens a wormhole that leads to a distant planet. When they decide to go in and explore the strange new world, they encounter a godlike being named Ra. Notice how the headdress looks just like Saturn’s crescent. 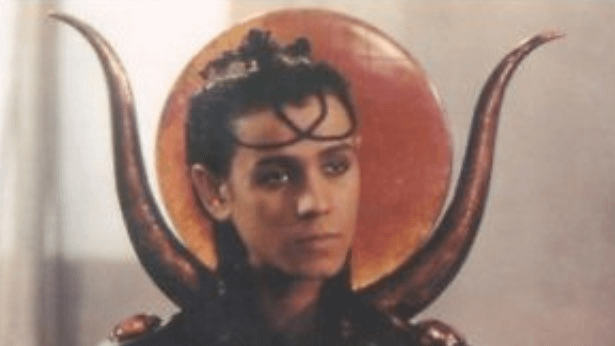 Ra from the movie Stargate 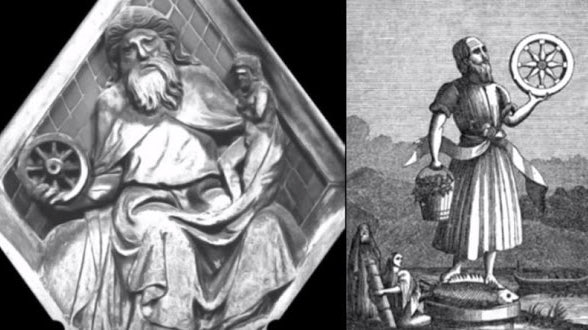 The octagonal portal motif can also be seen in Stargate as well as many other movies. But even stranger is the fact that CERN, the largest particle accelerator in the world, resembles an 8 spoked wheel. Many conspiracy theorists claim CERN is a doorway to another world. This would sound far fetched if it wasn’t for the fact that the scientists who work at CERN openly admit they’re looking for other dimensions. They’ve even nicknamed the machine the Tower of Babel. Oddly enough, CERN also resembles the Mayan calendar. According to Mayan mythology, there will come a time when a celestial alignment causes a cosmic doorway to open. Out of this doorway will come a serpent with an enlightened being named Quetzalcoatl riding on its back. When it comes through the doorway, the serpent will supposedly spew a blessed substance called Itz all over Earth. But what is Itz? And could this serpent represent something else? If you’ve read my thread about the plasma apocalypse you might be connecting some dots right now.

Some researchers say CERN was even built to mirror certain celestial bodies. The particle accelerator at CERN consists of two loops. The size difference between the two loops is proportionally equal to the size difference between the Earth and the moon with 99% accuracy. In his work, Goro Adachi points out many more correlations between CERN and the planets Mercury, Venus and Mars, as well as the constellation Orion. Was CERN designed to be a microcosm of the celestial alignment that once caused a wormhole to form in the sky? 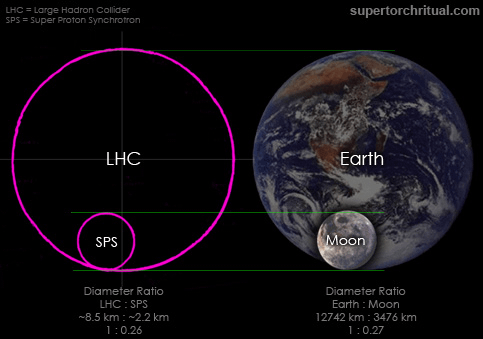 Some physicists claim black holes are just one end of a wormhole. Ironically, Saturn was called the Black Sun. The Black Sun symbol was used by the Nazis to show their source of occult power. The symbol, as well as the swastika, actually originated from the 8 spoked sun wheel. There are many references to the Black Sun in pop culture. In the Wolfenstein series, the Black Sun, which resembles a black hole, is a portal used by the Nazis to enter another dimension. In the game, the Black Sun also caused the destruction of the ancient civilization Thule. In Rogue One, the Death Star resembles a black sun. Ironically, when viewed up close, the Death Star looks just like Saturn’s moon Mimas. The music video for Black Hole Sun by Soundgarden also depicts a black hole opening in the sky that starts destroying the planet. 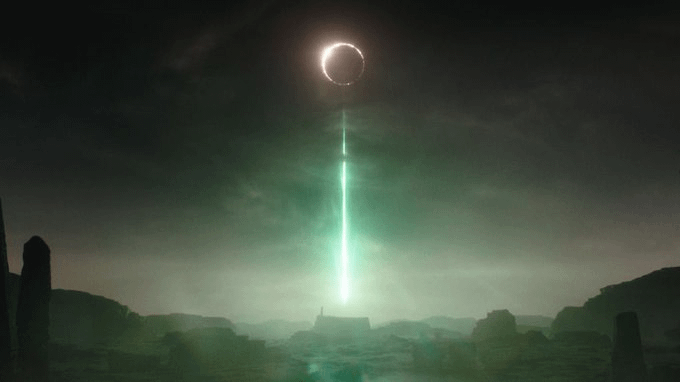 Death Star scene from Rogue One

Many people have pointed out that the hypothetical Saturn, Venus, Mars alignment also looks like a keyhole. Perhaps humans subconsciously chose to associate this shape with doorways for this reason. Many movies also use the keyhole to symbolize a portal to another world. The keyhole configuration also seems to be encoded in both ancient and modern architecture. For example, the Vatican, when viewed from above, looks like a keyhole. Perhaps these structures, like CERN, were built to mirror certain celestial alignments as well. But why do this? Perhaps there is something magical about creating on Earth, what is in Heaven. Remember the hermetic axiom as above, so below. Perhaps the information encoded into these structures quantum entangles its Earthly location with its Heavenly counterpart.

But how would it be possible for a planetary configuration to create a portal? Perhaps the portal has always been there. On top of Saturn there is a hexagon that some scientists suggest might be the side effect of a gravitationally stabilized wormhole inside the planet.

There are many references to a Saturnian portal in pop culture. In Interstellar, there’s a wormhole next to Saturn that takes the protagonists to new worlds. In Planet of the Apes there’s an electromagnetic storm near Saturn that sends the protagonist to another version of Earth. In the video game Observation, an astronaut goes into the hexagon on top of Saturn and is taken to a place where multiple universes converge. If you’ve read my posts about Saturn and its connection to cubes and simulation theory, you might be connecting some dots here as well. Is Saturn’s hexagon the portal that once opened up in the sky? Is Saturn’s hexagon the stargate that takes us to higher realms? Ironically, in Tron: Legacy, the protagonists escape the simulation they are trapped in by going into a pillar of light that looks just like it. 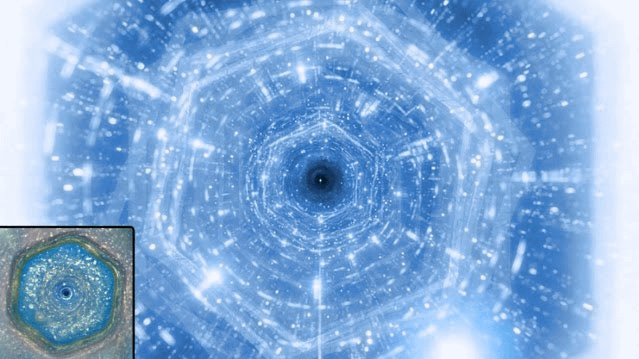 Saturn’s hexagon (bottom left) compared to the pillar of light from Tron: Legacy

It’s also interesting to note that at the very beginning of The Matrix, right before you are shown the simulated reality the main character resides in, there is a flash of light that looks like Saturn. Was this a coincidence? A synchronicity? Or was it intentional? 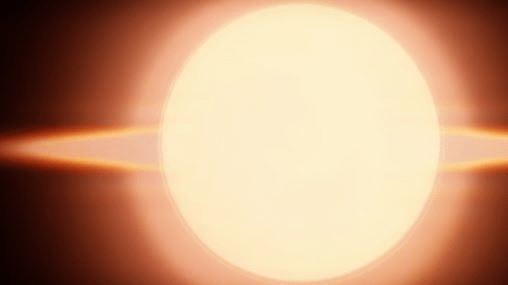 Opening scene of The Matrix

I believe the movie 2001: A Space Odyssey gives the us the most insight into the Saturn Stargate theory. At the beginning of the movie, there is even a scene that depicts one of the planetary configurations discussed earlier. 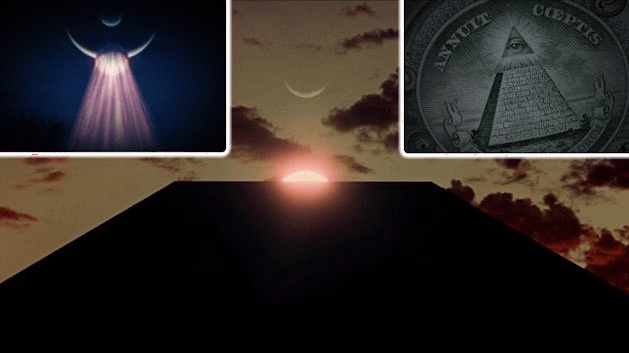 A scene from 2001: A Space Odyssey (center) compared to the Saturn, Venus, Mars alignment (left) and the all seeing eye (right)

The movie is about Bowman, an astronaut on his way to Jupiter, and his conflict with a sentient computer named HAL who controls his spaceship. However, as you read, keep in mind that the original destination was supposed to be Saturn but this detail was changed last minute due to the special effects team being unable to create a convincing rendition of Saturn’s rings. Throughout the movie, HAL tries to stop Bowman from completing his mission and kills his crew in the process. Interestingly, HAL resembles an all seeing eye and his name is a Coptic word that literally means simulation. The Gnostics used this word to describe the material world. 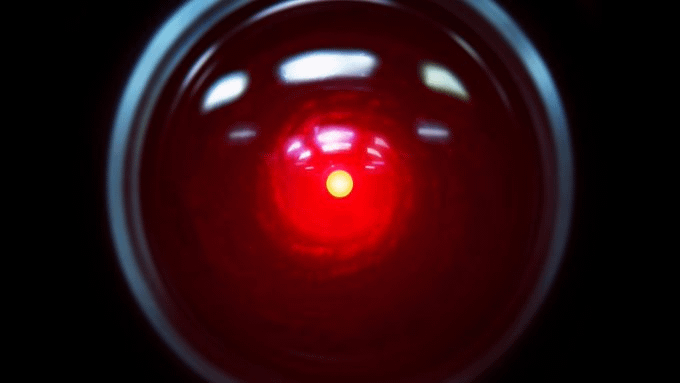 HAL, the all seeing eye

After Bowman finally deactivates HAL, he arrives at Jupiter where he sees a massive black cube-like structure called a Monolith floating in its orbit. The mysterious object pulls him into a vortex of colored light that takes him to another dimension beyond space and time. If you’re familiar with my work, you know I believe the black cube represents the false reality we reside in. At the end of the movie, he is reborn as a being made of light and looks over the Earth. In my opinion, this movie is about the path to enlightenment and escaping the simulation. Similarly, at the end of Interstellar, after the main character goes into a black hole, he travels into the future to a time where there’s a civilization orbiting Saturn. There he finds televisions resembling Monoliths that replay a documentary about life on Earth over and over. This seems to imply the protagonist escaped the simulation’s time loop by going into the Black Sun, also known as the Saturn Stargate, and entered a higher dimension. Are all the theories I’ve been posting creating one coherent narrative yet? I don’t know. 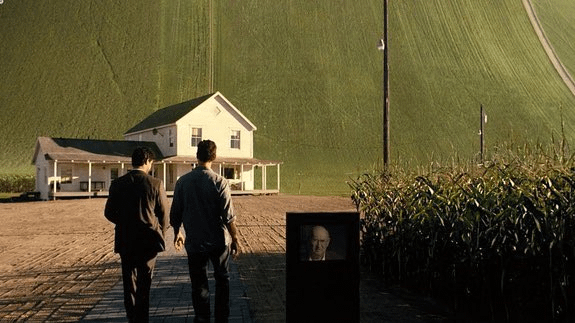 The ending of Interstellar

Is the Saturn Stargate the same portal that opens up during the plasma apocalypse? Is the Saturn Stargate the same portal one ascends through to leave this virtual reality? There is no way to prove any of this, but it is fun to speculate. However, I’d like to end with this. According to the Law of One, a documented series of supposed conversations between a professor of physics and a channeled entity known as Ra, there is a council who lives in Saturn’s rings who keep this planet quarantined from the rest of the universe. Remember how Ra represents Saturn? According to Ra, there is a great harvest of souls coming soon. Saturn was also known as the God of Harvest. There’s even a scene in Space Odyssey that seems to hint at this event. This will be the topic of my next thread! Thanks for reading! 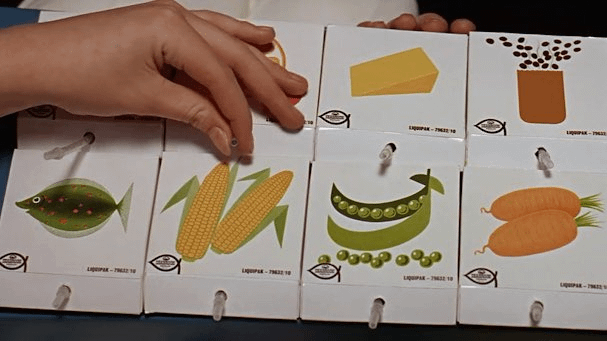 Was this scene from 2001: A Space Odyssey a nod to the coming harvest?